Last week, I was working with Feng Shui and cleaning my wealth area. As I was thinking about opening the doors to more prosperity, my eyes fell upon a small Anubis statue I have that came from Egypt. Anubis opens the doors to the underworld, so I thought maybe he could open some doors to my prosperity. I put the statue in my wealth area and said, “Mighty Anubis, as I have placed you in the wealth area of my home, may you open the doors to increasing the flow of money into my life with love, light, peace, and trust.”

The very next day, the lawn people came to cut our grass. While in the back yard, near the wealth area, one of the guys hit a rock. The rock flew and hit my sliding glass window, shattering it into a million pieces. When the gentlemen came with the replacement glass (that I did not have to pay for), he fixed the rollers in the door so the sliding glass door now moves more smoothly than it has in years.

Three days later, while in my kitchen (also located in the wealth area), the door to my oven fell off! The hinge was not the strongest and it chose that moment to fail. Now we are getting a new stove!

Yes, money flow has also increased; however, I feel Anubis wanted me to fix some of the things in my home to make the energy flow better. I got the message. This is typical of what Goddess puts me through.

Yin and Yang is a symbol representing balance and it originates from China. The glyph looks like a circle that is divided by an S in the center, and each side is sort of tear shaped or fish shaped. The left side is white with a black circular spot in the center of the largest part. On the right side is the complete opposite with black being the predominant color and a white circular spot in the center of the largest part. A circle surrounds these two halves and joins them together as one. The correlations to life and the Universe are endless. This is the sign of duality – of opposites. However, these opposites do not oppose each other, instead they embrace and complete each other. The following lists only a few of the aspects to Yin and Yang: male and female, sun and moon, fire and water, light and dark, night and day, above and below, hot and cold, life and death, heaven and earth, and spiritual and physical. In addition, the Yin and Yang is the symbol of the spirit.

Within Chinese culture, the Yin and Yang is at the basis of science and philosophy. The aspects of complementary opposites are always considered. When someone suffers from disease, traditional Chinese medicine will cure the person using the system of Yin and Yang. The body and each body part are classified as either Yin or Yang. One form of healing is with acupuncture. It is based on special needles, which are inserted into specific meridian points of the body. The intention is to correct imbalances of the body’s energy. Herbs are also commonly used to heal. If you are suffering from a fever, for example, this is considered to be an aspect of Yang. Therefore, herbs as well as foods and liquids, which are cool and are classified as Yin would be used as cures.

Each type of food item is classified as either Yin or Yang. Maintaining a healthy diet requires eating a combination of both types of foods. When a person has heartburn, for example, this is a Yang condition. The masculine energies relate to the fire and spicy things. As a remedy, a Chinese doctor will likely prescribe cooling herbs for teas and food types. In other words, ingesting food and drink that are of the Yin nature.

Feng Shui, which deals with the placement of objects, is another aspect of Chinese culture that uses the Yin and Yang. For example, some rooms are dark, which is associated with the Yin. In order to bring balance to the room, Yang objects are used, which includes light colored furniture and paint to brighten the room.

The white side is the Yang and is considered masculine. The black dot symbolizes that in order for a man to find balance, he must embrace his feminine side. Men are trained not to cry and show emotions, which is considered a feminine trait. However, those men who are able to express emotions are considered strong and not weak. The black side is the feminine aspect, which is the Yin. The white dot symbolizes that in order for a woman to find balance, she must embrace her masculine side. For a woman to embrace her masculine side, she will not hesitate to take charge of situations and direct others. The Yin and Yang symbol reveals that balance is found when we embrace the masculine and feminine qualities contained inside of us.

Yin and Yang is a symbol of the spirit. Before we are born into the physical world, we are spirits, pure and bright. Each of us is our own Yin and Yang. We are neither male nor female yet we are both. The circle is infinity, which signifies eternity. Our spirits are eternal and we contain within ourselves the essence of the masculine and the feminine.

The physical world has certain rules, which all life is bound by. The creation of new life is dependent upon male and female copulation, unless one happens to be an amoeba. Therefore, when our spirit enters the physical world as a human being, it is through the process of birth in the male or female form that we can express ourselves as physical beings.

Here are a couple of easy ways to help you remember which part of the Yin and Yang is male and which part is female. Masculine energy is associated with the Sun while the Moon belongs to the feminine. The Sun shines light and on the Yin and Yang symbol, the closest color to the sun is the color white. The Yin is considered Lunar because the moon is seen best in the black darkness. In addition, the Goddess of mercy and compassion is Quan Yin. Therefore, Yin is the female side of Yin and Yang. 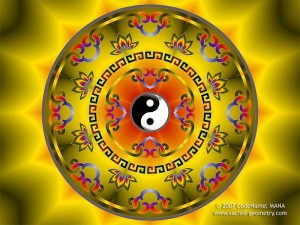